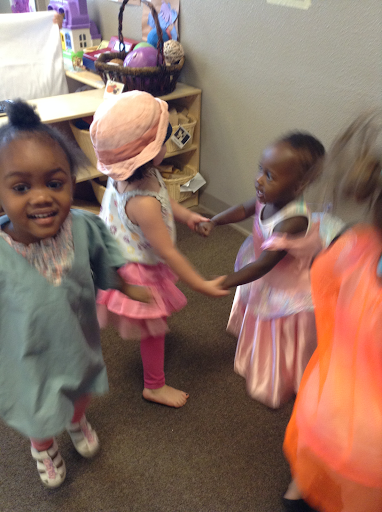 Sharon Reede and Tiffany Corona were excited for the unique dynamics of teaching in a multi-aged Early Head Start classroom of toddlers. How would they build relationships with a blend of one, two, and three-year-olds during their time teaching at Strong Foundations Early Learning Center at Homeward Bound?

Sharon and Tiffany hoped to find answers as part of the Collaborative Planning Community of Practice, organized by Paradise Valley Community College (PVCC). In this professional development program, they deepened their understanding of how children can build relationships by observing, documenting their observations, and then meeting with Christie Colunga and Ana Stigsson, Early Childhood Education Faculty at PVCC, to exchange ideas.

Through this collaborative study of documentation, Sharon and Tiffany amplified children’s right to interact and build relationships with one another and their right to be seen as the protagonists in their learning.

What captured AzAEYC’s interest in this project was how Tiffany and Sharon carefully observed the children and allowed time for relationships to unfold, actively stepping back as children made connections on their own. Those interactions can have such power. They occur when teachers believe deeply that children deserve to be able to make these connections.

It all began with a behavior that sometimes occurs in a toddler classroom – biting. Sharon and Tiffany share what they experienced in this toddler class, and how a bit of music created a new space for communication that helped the children build relationships.

Homeward Bound is transitional housing, but the early learning program served a variety of young learners. Some families either came from a homeless shelter, like UMOM New Day Centers, or they were in the process of becoming homeless. The program was public, so children from the community also participated alongside the children in Head Start. Some children were experiencing the trauma of being without housing.

In our room, biting became a big issue. Tiffany and I were asking ourselves – how are we going to build relationships? I started using music in the mornings to set a calming mood  — and then began to realize that they really enjoyed music. Certain children responded to certain melodies, certain beats.

We would offer items to make music — coffee tins and other ordinary items. The children showed us the way – some would take random items to use. From these observations, we began to think through how to provide tools for that purpose.

We had an especially hard time understanding one child who was trying to express his needs. Biting was one way he communicated with other children. That’s where our study really began.

We try not to interfere when there could be a connection going on that we don’t understand. Because we paused to observe and allow the interactions to unfold, we finally caught moments where children communicated with each other and forged a connection. Moments where we noticed children reaching out to touch each other’s hands instead of biting, seeming to say, “Do you want to play with me?” – giving an invitation to “Dance with me!” We did a lot of drumming. We began to realize that yoga was of interest to the group.

Some days, children would just do it on their own. We started naming moods and feelings. Toward the end of our study, we saw that children knew what they needed and what they wanted. They would even tell us which songs they wanted to listen to.

Each teacher is at their own level when working with children. Tiffany and I agreed on creating a culture of observation and a collaborative learning space together.

We let children explore, always keeping an eye on them and being in close proximity to make sure the children were safe. But, we also gave each child space where they had opportunities to build relationships. If teachers are always intervening, they may miss those moments.

Sometimes, the hardest thing for teachers to do is to take a step back and just observe what’s going on with the children.

We started offering yoga time. Our observations showed us the children wanted to negotiate space from their peers. They wanted to walk, balance, and be able to explore.  That’s why the yoga movement was really interesting to them.

Our focus at the beginning was building relationships. As we studied the pictures over time, we realized music played a big role. Music is universal. It doesn’t have to be just verbal. We discovered the children were communicating physically and emotionally. Our biggest focus in the classroom was emotions. We wanted to focus on supporting the children to express their needs in an appropriate manner.

Magic happened when the toddlers showed us a deeper meaning of dance and relationships. The children moved from directional songs to instrumental and acoustic music. They began to use hand movements after observing each other’s body language.

They expanded their friendships through movement that transcended verbal communication. This also strengthened some relationships between children.

Playing a variety of music allowed the children to develop their self-identity and to identify their emotions. Over time, the children gravitated naturally towards a unifying group experience rather than an individual one.

I feel really proud as I look back on it to have had that opportunity to work with that community, to help the children learn to make positive relationships, and take chances and really explore something they wanted to do.

I was used to working in teacher-directed programs. Teachers did everything, showed children how to do things. At Strong Foundations, we stepped back, got out of our comfort zone.

Through the study of documentation, I opened my perspective. I had considered the rights of children in my work. But until I started in the Community of Practice, I’d never met other people that thought the same way I did. We learned about the Reggio Emilia Approach to Education, documentation, and the process of collaborative reflection. Tiffany came on board that August, and she was willing to jump in with me!

They have a right to express their needs in the classroom. By observing and studying our documentation, we found those “right moments” in the room. As educators, we have to think differently about our work. Teachers have the right to connect, to take a step back. We tell children to take a deep breath, but teachers need to be able to do that, too. And to learn through collaboration. And to work together.

Tiffany Corona and Sharon Reede currently teach at NAEYC accredited Lincoln Learning Center, an outreach early childhood program of HonorHealth, Desert Mission, a non-profit in Phoenix. Both Tiffany and Sharon previously worked at Strong Foundations on the Homeward Bound campus. Homeward Bound transitional housing serves families who have experienced homelessness with the goal of helping parents find long-lasting career positions. Children of the clients of the residency on the Homeward Bound campus attended Strong Foundations early learning center alongside children from the community.

Meet an ECE Pro from the Navajo Nation