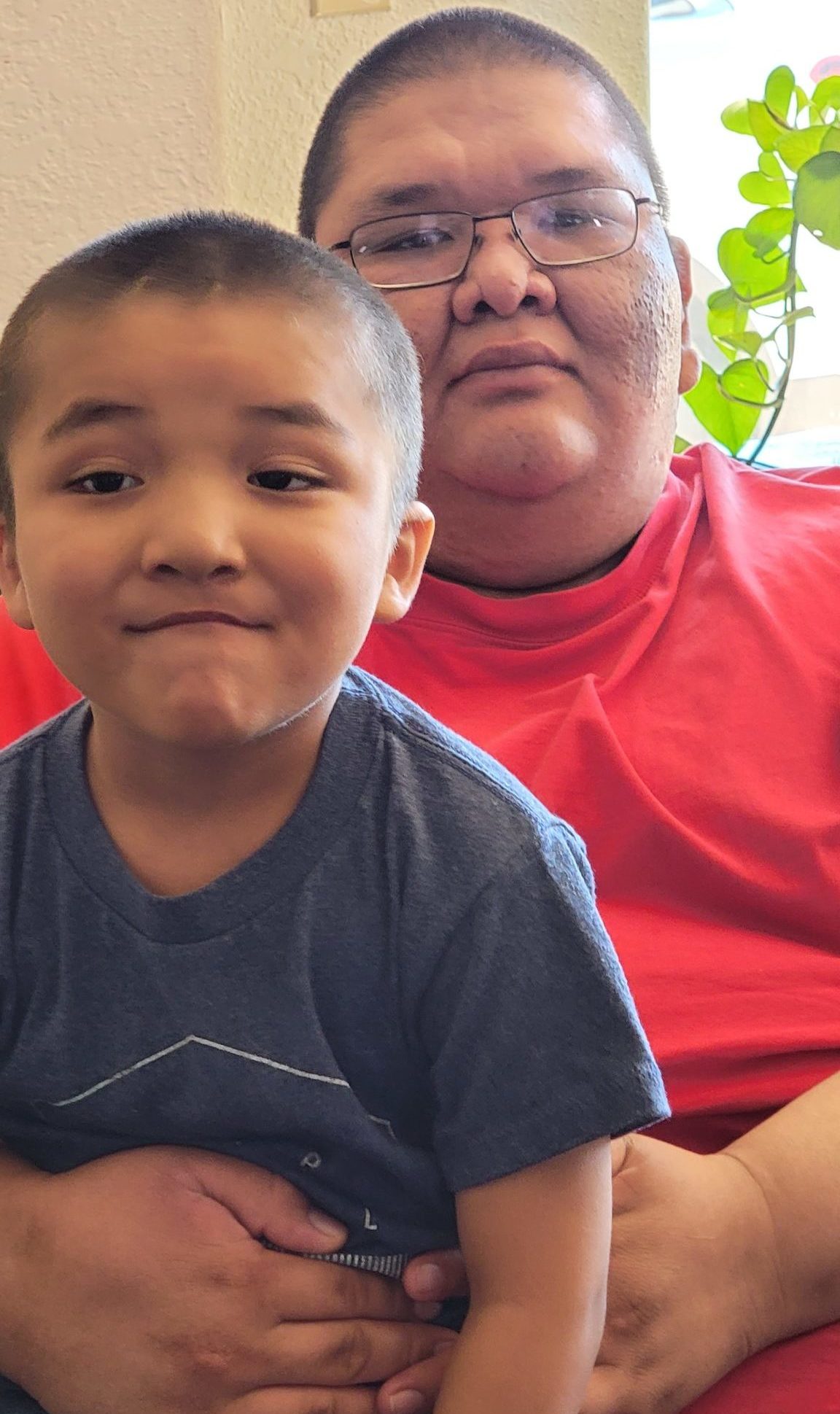 Kith and Kin is an extensive support program for family (kin), friend, and neighbor (kith) child care offered by the Association for Supportive Child Care. Home-based child care is an important option for families seeking affordable, accessible care that fits their needs and is one of the country’s most common forms of caregiving.

Sharrisa Ben is a Kith & Kin Specialist, based in St. Michael, Arizona. She provides direct services and support to children and families throughout the Navajo Nation where she is a member.

Typically, participants in the program meet in person within their communities throughout the Navajo Nation. But during the pandemic, Sharrisa says they had to adjust. “We are rural to begin with, but this past year, we had to take a different approach.” Kith and Kin offered online opportunities, but that was also a challenge, she says, because of spotty connectivity. “Trying to find participants with the Navajo Nation — being shut down as it was — became very difficult.”

Young children have rights, and we have an obligation to support every learning environment and the individuals who play a role in children’s lives, says Sharrisa. That includes Family, Friends, and Neighbors (FFN) providers. This population is often overlooked — yet over half of the children in Arizona are in the care of FFN providers before they turn five.

One of the participants Sharrisa met this year through the Kith and Kin program was Lawrence Todecheene, of Kayenta, who cares for his nephew, Brody Yellow. “I just can’t speak highly enough about Lawrence — his dedication, his commitment to his nephew.” She asked Lawrence if he would be willing to share his thoughts about Kith and Kin and how it has impacted his time in caring for Brody. His story follows below.

“It just really makes me feel good that some of the information we provided was useful to Lawrence, and really helpful to Brody,” says Sharrisa. “That’s the intention behind our support.”

Brody’s Story: As told to AzAEYC by his uncle, Lawrence Todecheene

My nephew Brody is four years old. Right now, he’s with the Navajo Nation Head Start, but I also help care for him during the week. He likes to do a majority of things. He’ll play outside. He likes to do art activities, use the art supplies. He really likes to use those. He loves to listen when we read books to him.

We live in a small town. We do have gas stations and a grocery store, and we have the hospital, the schools nearby, but it is a small town. So there are rural areas further away where people do have to travel 20 or 30 miles just to get to a store or to even come to school. I’ve had friends who live all the way up to Black Mesa, close to Chinle, Page — they would all get up early in the morning, real early in the morning just to catch the bus —  and that’s to get their education or to go see a doctor. Pretty much everyone knows this, family do tend to stay around this area. So, we take a child to someone to watch or a close family member or close friend.

The Kith and Kin program showed us an activity – we made a little tent to read under and whenever they would bring that up, he would run over to grab the blankets and try to start putting it up. And he still does that. When I ask him, “Do you want to read a book?”, he’ll go and grab a blanket and try to put it up. He’ll sit under there while I read it to him.

The program also provided supplies – scissors, markers, crayons, and construction paper, magnetic letters that we’ve been working with him trying to spell his name on a metal cookie sheet that was provided, musical instruments, like little rattles, and a magnifying glass, just things to help him explore and try new things. He loved doing the yoga they offered. He remembers the poses—  butterfly up, butterfly down, tree pose, our meditation.

He was born with a cleft lip, but he got it repaired, his speech isn’t all there, but he’ll try to say “Namaste” when he’s done.

We are pretty close knit. But, some specific services we do have to travel are to go to Flagstaff, Farmington, or a specialist for Brody’s cleft palate. My sister had to constantly travel to Flagstaff, which is close to 200 miles away, for his medical appointments. He goes to a speech therapist. I don’t know what state she is in, but he goes to classes through Zoom and she helps him through that. Before we would probably have to work with the school to try to figure out a way for him to get his learning and his therapy for speech that way.

With the ages and stages, we learned that he’s ready to learn, to do certain things. We noticed that he’d be particularly grumpy, sometimes during the day. Through Kith and Kin, I found that it’s recommended he takes naps during the day. And I didn’t really know that naps were necessary at his age. After laying him down, reading to him, have him doze for 30 minutes to an hour, he’ll wake up and he’s in a better mood and ready to learn.

Early learning is really important because, as I mentioned, with his cleft lip, it helps guide us through helping him develop speech. He’s come pretty far. Before he would mumble a lot. Since we’ve been working with him through what we’ve learned through Kith and Kin, he’s actually producing more words and a lot better. Now he can express himself. He’s learning his numbers and his spelling with other resources from the program.

Before, his mom had the only car seat. But since I went through the Kith and Kin program for car seat and vehicle safety, I was provided a booster seat. Now, I can take him out. He loves his booster seat.

I’d really like him to express himself, to really work on his speech a lot more because there’s so much that I want to know about what he’s saying.  If he’s calm, he’ll talk slowly and he’ll say some words clearly, but when he gets excited it just comes out as a jumble. He’s just so happy and smiling trying to talk.

I’d like to see him get a better education, further himself. I know he likes animals, so maybe he can go to a field where he would work with animals someday.  He likes technology, too. When he’s playing his learning games, he’ll run up to me, play next to me, try to show me what he’s doing. With my family, I personally don’t have any kids on my own, so I always consider their kids my kids.  My parents would always say, “Oh, there’s your, there’s your son. And go, listen, go talk to him, go teach him.”

About Kith and Kin

The Arizona Kith and Kin Project is facilitated by the Association for Supportive Child Care and consists of small support-training groups that meet for weekly sessions over a 14 week period. Core curriculum topics include Child Development/Ages and Stages, parent/caregiver relationships, positive guidance and discipline, health and safety, language and literacy, and nutrition.  Additional topics and speakers are offered based on the individual needs and requests of the group and the need for specialized training. The Arizona Kith and Kin Project currently serves family, friend, and neighbor providers in Maricopa, Navajo, Apache, Gila, and Pinal Counties on a space available basis. Learn more.