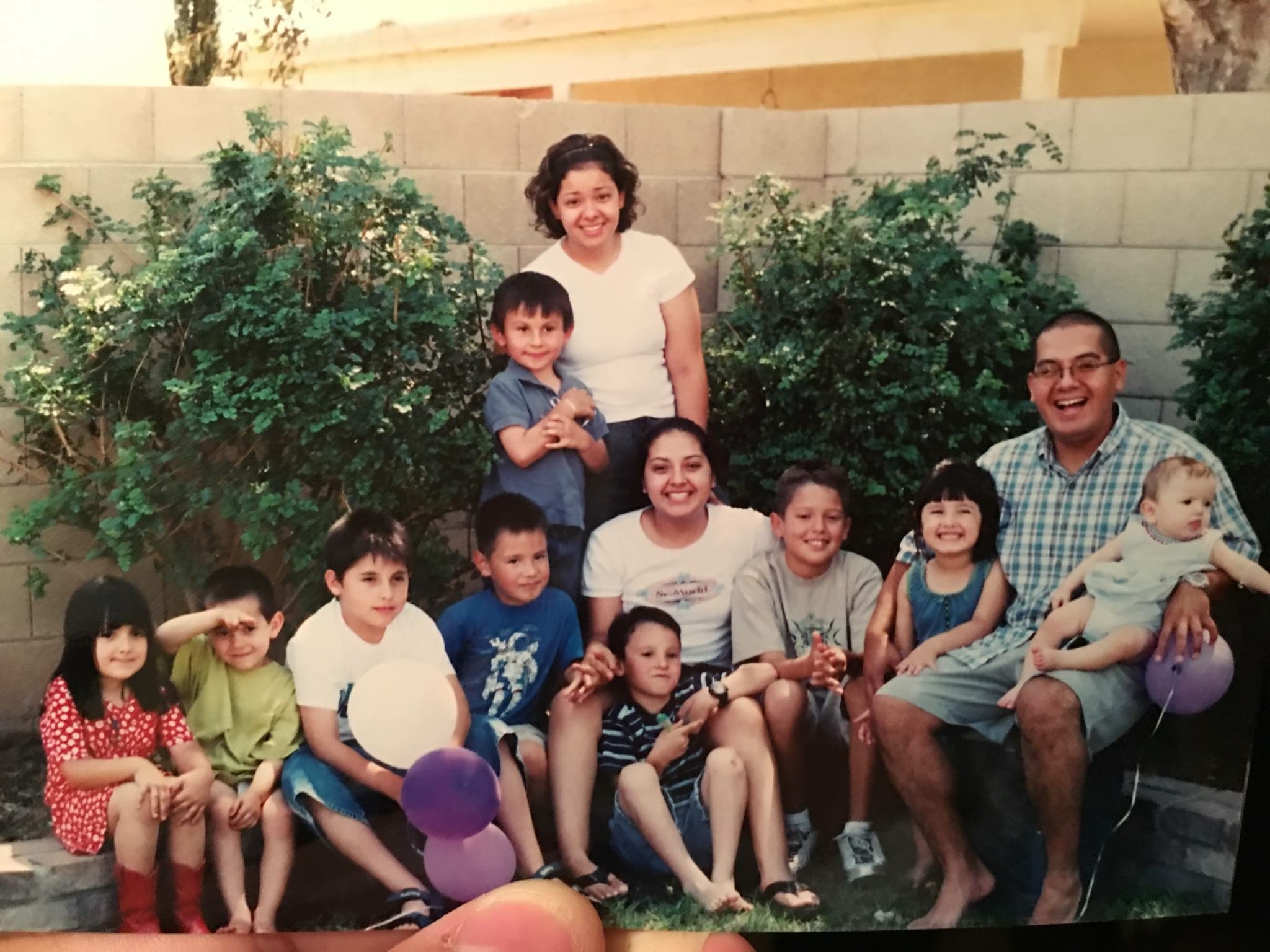 AzAEYC Board Member Jonathon Gonzales talks about growing up in Arizona as a dual language learner in a large family, what he’s learned about supporting military families, and how enrolling his own children in Head Start changed everything.

What drew you to the early childhood field?

I was a Head Start dad way back when. But the science behind early ed really began to intrigue me once I started working at First Things First. For me, it was eye-opening to really dive into the research around how social emotional connections for children and support from families or caregivers can really shift and change outcomes.

It’s the circle of life. You start off as a parent learning how to parent, not really recognizing what you were learning, and then you fast-forward all these years later, and see how important early education truly is.

Talk about the photo of you, sitting with all of the young children above.

This is the entire set of grandkids from my mom’s side of the family, and two of my children are mixed in as well. I helped provide “child care” for all of the kids at some point, I helped raise them along with my sister Leslie. I was the oldest of all the grandchildren since my mom was a teen mom, the next two oldest, Leslie and Gina, my sister and cousin, I helped raise as well. I had to babysit and feed them after school and during summer breaks. So, I have been helping raise children since I was 10 or 11 years old.

Quite a bit of responsibility for a child at of that age but perhaps it sparked an interest in the career you chose?

The expectation from my mom and grandparents was that I always serve as an example to the younger kids. The large family photo was taken at my mom’s house, she kept it looking like Better Homes and Gardens–lush and green with a variety of native and drought tolerant plants. She also kept toys and a playground set in the back for all the kids. She passed away in 2015 but before her death, she admitted to me that she wished she could have had her own child care center. I never knew that about her until a few months before her passing.

How about your own personal experiences growing up and being a young child yourself? Did that have any impact on why you work in the field today?

I was lucky. I was blessed to have some caregivers that my mom could count on, but there wasn’t necessarily consistency. We talk about that in early care and education as a “patchwork” of care or providers. I had a lot of what most folks would consider kids & kin or family, friend, and neighbors as my primary care providers.

But then your mom decided to enroll you in an early care program. What changed?

My mom recognized that there was what she thought might’ve been delays, or some quietness that I had. So she enrolled me at Merry Moppets, a center which used to be on 75th Avenue and Indian School.

I was four years old, transitioning into kindergarten. It was one of the few childcare centers in the West Valley serving that age.

What do you remember about that experience?

You have to socialize children early so they can learn how to play with other children. Not that I couldn’t play with other children. I just was so darn shy! I held close to that teacher. I remember holding onto her leg, and just never really leaving her side. I remember that she told my mom, she said, “The only thing he’ll eat is saltine crackers, and I don’t know why.”

Most of the people I was raised with were my grandparents, or older women, and for lunch, it was soup and crackers. You got a can of Campbell’s soup and saltine crackers. I wasn’t familiar with all the other foods at the center.

So you stuck with the familiar. You were also a dual language learner. How did that shape your early years in school?

What do you remember about going to speech therapy?

I saw a speech language pathologist. She sat across from me in this half-moon table, and I put this cone wraparound device over my mouth, and it connected to my ear like you’re talking to yourself. It looked like a telephone but it was enclosed. I had to sit, I remember, hours every day. I think it was an hour a day.  At beginning of third grade, I finally transitioned out of speech therapy.

Any reflections on how that bilingual learning contributed to the person you are, today?

Whatever language is being spoken at home is the language that would typically be supported. But because I was going back and forth between different languages, I think that really made some cross-connections in my brain. To this day, I hear it; I’m self-conscious, like those of us who have these issues, dual language learners, I still hear myself sometimes not able to pronounce certain words, or I stumble over certain words because in my mind I’m still working overtime just to process the words.

What were some of the benefits of the dual language learner background?

Even my learning style is somewhat similar. I’ve taken a bunch of different personality tests and learning tests over the years. You tend to have that happen to you, and because I was so dominant on some other senses or whatever, my visual acuity for like analytic fields. So I got tested. I ended up being more a dominant visual learner. I think it was because of the speech delay. When one sensory or part of your connections aren’t happening, you rely on these other parts of your body. My poor mom, I probably stressed her out.

As you progressed through school, you began discovering your strengths.

I tested off the charts for spatial skills. In high school, I did a lot better in those areas of academics, like trigonometry. I had to learn to strengthen my reading, my speech. I did a lot of things to bolster and support that over the years.

You currently serve in the Arizona Army National Guard as a 1St Lieutenant with the 3666th Maintenance Company. Anything you’ve learned that connects with early learning and family support?

We talk a lot about readiness for soldiers, in terms of training and getting them resources. I encourage them to connect with services for early learning. I think that certainly it helped me to focus on those family supports that are critical for these families.

How has serving influenced your own career?

I think in terms of leadership style, maybe it’s started to transform who I am and what I’ve become. In leadership with the Army, they always teach “when you’re in charge, be in charge.” In other words, don’t flail and not champion something.

What changes would you like to see in early childhood education in our state?

Certainly I think early education is now being discussed as part of the continuum of education. We can continue to fight for funding for Pre-K/all-day-K. That’s what I love about being a member of NAEYC. My daughter, her friends, many having participated in Head Start themselves, and knowing where I work, even their peer groups are recognizing that early education is important. So I think the discussion is becoming broader. Folks are talking about early ed in a very positive way. That’s what makes me hopeful.

Jonathon Gonzales is the Family and Health Administrator with Catholic Charities Community Services Westside Head Start Program. Previously, he was the manager for Phoenix Children’s Hospital Center for Family Health and Safety. Jonathon has worked as the State Director of the Arizona Head Start Association (AHSA) He is married to Vanessa Gonzales and is the father of Adam Gonzales, 22, Estrella Gonzales, 20, and Julius Armenta, 15.

Congratulations to all Arizona ECE Graduates!